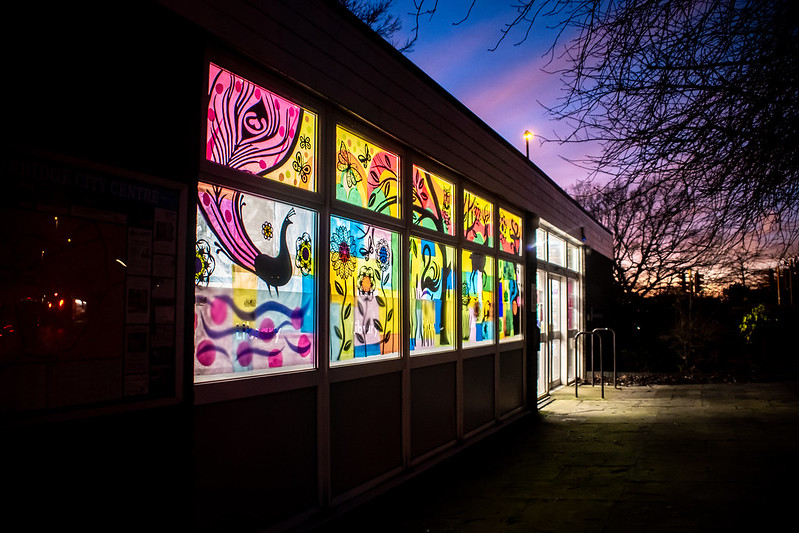 The wonderful thing about Window Wanderland is that each festival is totally unique. Each window is different giving a true reflection of the community.

After delivering a successful Window Wanderland in 2021 with over 200 windows lighting up the area, Cambridge City Council decided to launch a second in 2022 – but with a twist.

Cambridge Council decided that the area needed something bright and inviting to bring the community together, and so put out a call for local artists to create large, vibrant installations on public buildings.  These beautiful commissions were the key focus of the Window Wanderland experience in Cambridge this year, and certainly were a sight not to be missed.

Despite Cambridge’s affluent image, the community of Barnwell, a suburb of Cambridge, is among the most deprived areas in the UK, blighted by traffic and a lack of community spaces.  Through Window Wanderland, Barnwell was transformed as part of the project with spaces lit up with warm and inviting displays.

We caught up with Penny, one of the artists selected for a commission, to give us an insight into how Window Wanderland brought new energy to the community of Barnwell.

Originally from New Zealand, Penny is a freelance illustrator who has worked with huge clients such as Vogue, Elle, international hotel chains and global advertising companies. She is an active member of the community, working on lantern trail projects and facilitating art workshops with local charities. Working alongside Penny for Window Wanderland were Karen Kellet and Sibylle Hutter, both local artists who are involved with many different local projects, including running art workshops and clubs, children’s illustration and teaching German.

When the opportunity to get involved with the festival came up, Penny jumped at the chance. She had created designs for the windows of Cambridge Guildhall and Mandela House the previous year, and had seen the impact Window Wanderland had on those in the area; as Penny lives close to Barnwell, she could see how the area needed an injection of colour to brighten up the long winter days.

Penny’s vision for Barnwell Library was to create a beautiful abstract flower garden called ‘The Garden of Love, Peace & Hope’, depicting animals, nature and man living in harmony, which was very well received by the community!

“We’ve been overwhelmed by the positive reaction from the public on social media saying how much everyone loves the fabulous colourful design!

The library told me that the window design had brought more people into the library
and cheered up the locals. So due to popular demand it’s still up on the windows for people to view nearly a month after it was supposed to be taken down.

Our local community has benefited through having an injection of a beautiful colourful story brightening up a dull corner of the community which gives out a lovely warm glow during the cold dark long days of winter.”

As for plans for next year? Penny is hopeful that the positivity generated from this year’s Window Wanderland will get more people involved next year:

“I would like to think that the lasting impact is that this window has inspired locals to decorate their own windows and to look forward to the next Window Wanderland festival next year!”

We can’t wait to see what the Cambridge community creates next year!